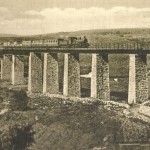 The building of the Owencarrow Viaduct, 1903 The building of the Burtonport extension was a great engineering challenge with little machinery or electric power, It was 100% manpower and horse power … No jack hammers, air compressors or jcb’s. Dynamite was used to blast the huge cuttings…. Another of their problems was to build a bridge across the Owencarrow river and bog … A temporary steam driven pile driver was used to push oak trees from Derryfad and Umerfad into the bottomless bog and swamp … Fleeces from sheep were also driven down and then rocks and concrete … this was their platform and then the piers were constructed with granite blocks that had been cut and numbered and then they were hoisted into place with a block and tackle. The Viaduct disaster was at 8.00pm on Friday 31st of January 1925, there were 36 passengers on board of 4 of these had been hurled to their deaths …  the train had also been derailed in 1908 but there were no casualties luckily.