Wilkins Bar ( Wilkins Bar Churchill ) is one of 3 pubs here in Churchill and it was here in 1833 as it has been shown in the census at that time,

And there has been seven generation living here since, It is also a listed building.

The post office was said to have been here in 1899, a Robert Wilkins was the proprietor at that time.

There was also a small hotel built on to the right hand side of the main building and the post office was then moved to where it is situated now.

The post office was here until a 1955/66 and a lady called Mary Gallagher had taken it over, but had returned to the Wilkins family again in 1995/96.

The Church of Ireland Churchill.

Mrs Cornelia Adair had given money to build on a side isle to the church here in Churchill, in trying to make amends for the wrong doings of her husband,

When in April 8th 1861, 154 years ago, marked the beginning of three days of terror for tenant farmers and their families in a beautiful scenic part of Co Donegal.

By April 10th, 85 adults and 159 children had been evicted from their homes by their landlord, John George Adair.

In 3 days, 244 people from 47 families, had been evicted from 46 houses, and 28 of those houses were either totally destroyed or de-roofed.

On the East window of this church Cornelia had funded for the 3 stained glass windows depicting the life of Colmcille, the 1st is the Baptism of St Columba, the 2nd is St Columba landing in Iona, and the 3rd   on   the Death of St Columba.

The locals had a plaque mounted inside this church in thanksgiving for the generosity of Cornelia Adair which reads,

Through her generosity the Chancel, east window and the side aisle were erected.

There is an Oar at the back of this Church that was used in the Commemoration of St. Columba, by locals who had followed Columba’s Path from Derry to Iona; this epic journey was done in June 1983.

There is a field not far from the Church and it was said at the time that it was to have been the largest field in Europe at approx 344 acres.

We have an old courthouse ( AD 1842 ) and it would have been used in many a trial, and also famous in the  trial on the murder of James Murray the Shepherd of John George Adair, said to have been murdered, which then led to the Derryveagh evictions

There was a school above the courthouse, which only had one room and it was a mixed school,

In 1900 the roll book show that there were 76 children attending this school at that time.

There was 2 wings built on later to this court house, one on each gable; one was for the Judge and one for the school teacher.

Lots of local information can also be found on  Hidden Donegal

The Royal Irish Constabulary had been in Ireland in the years 1814-1922,

The stone with the Rock Art near Gartan Loch lines up with the standing stone on the back of Brown Mountain, and also with a Megalithic Tomb near Drumoghill, Termon.  Compass settings are 40 degrees.

This centre had renovated the old stables and outhouses to what it is today,

The original buildings and House on the Lough Veagh Estate which was built in 1825, was owned first by a family called Stewards and the family of James Heweston, and his son Edward Daniel and his sister Katie.

Across Gartan Lough there is a row of stones called St Columba’s steps. This is from Bell point to the southern end of land where the Glebe Gallery is situated across the lake

It is said that one morning when he was putting on his boots, that the enemies had come and he had to run away having only one Boot on,   and it is said that he crossed here to get away from his enemies reach.  Columba said, after that a curse would rest in the man that laced one boot, before he had put on the other,

Locals try and avoid this curse by putting on both boots before lacing one.

In Churchill near the Barracks there is said to a print of the foot of Colmcille in a large stone near the roadside and that locals still stop and pray here.

544 AD he is said to have departed St Mobhi’s monastic school, Glasnevin because of an outbreak of the plague.

573 AD Colmcille visits Ireland for the convention of Drum Ceatt.

Even though Colmcille was born about 1,500 years ago, his life is still remembered in Both Scotland   and Ireland, His stories spans our Islands, our     cultures, our languages, both Scottish and Irish Gaelic.

Colmcille had taken a boat to Tory Island and had defeated the forces of evil to bring Christianity there.

Colmcille, also had been to Gleann Cholm Cille, The Glen of Colmcille and a pilgrimage in his honour is still carried out every year,   9th of June on his feast day

Colmcille was ordained a priest in Clonard in Co. Meath

In Ray, near Falcarragh, Colmcille is said to have left a cross here that was carved from Muckish Mountain. It is said that this is the oldest and tallest high cross in Ireland.

There is also a lake in Creeslough called Lough Colmcille.

It is said that Colmcille has copied a book of psalms owned by St. Finnian, his former teacher, and the High King was asked to intervene and ruled in Favour of St. Finnian,  saying “ to every cow its calf and every book its copy”.

It is said that St. Columba had also been to Argyle, and was looking for land there to build a Monastery.

In Iona his Monastery was one of the most famous in Europe for its highly illustrated manuscripts, Colmcille’s monks had travelled through the highlands and Islands of Scotland by land and sea spreading Christianity.

Ireland’s greatest missionary and his followers have given us the most important illuminated manuscripts in the Christain World. The Book of Durrow, the Book of Lindisfarne and the Book of Kells, all works of Columban missionaries represent the supreme achievement of Celtic Christian Art

“This new Eire shall be Eire the prosperous; great shall be her renown and her power, and there shall not be on the surface of the wide earth a country found to be equal to this fine country… Seven years before the last day, the sea shall submerge Eire by one inundation.”

St. Columbcille predicted the Viking raids on Eire from the 8th through 10th centuries, the Anglo-Norman invasion of 1169, the Turod conquest, the Irish rebellion of 1641, the great potato famine of 1845-50, and the invention of railroads (“In both North and South iron wheels shall support fiery chariots…”).

St Colmcille also said that the four seasons in Ireland would be all the same and you wouldn’t know which season you were in.

He had also prophesised that males and females would look like each other.

He has also said that a black pig would come through the hills of Donegal, hence the name on the railway engine called the Muc Dubh.

gartan clay is a clay found near Gartan in Co Donegal that is said to possess special powers. If you carry it on you during a journey, no harm will come off you, if you have it in your house you will never die in a house fire,

Nor will any rats inhabit your dwelling. These are just some of the beliefs still held strongly today, albeit mainly amongst Donegal people and their descendants.

Gartan Clay is said to have these powers because St Colmcille was from Gartan and he bestowed these powers on the soil as a gift to his clan. 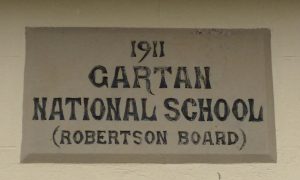 Gartan N.S. at Carrowtrasna opened as a National School on the 1st day of Febr

The present school was built in 1911, but the students had not moved from the old school until the 3rd of June, 1912. The old School at Carrowtrasna still stands today and is used as a home by locals.

The building of the present school was funded by Mrs Cornelia Adair in 1911,

The estate of Glenveagh was created in 1857-9 by the purchase of several smaller holdings by John George Adair, who at that time was a wealthy land speculator from Co. Laois. John Adair was to later incur infamy throughout Donegal and Ireland for evicting some 244 tenants in the Derryveagh evictions in 1861.

After marrying his American born wife Connelia, Adair began the construction of Glenveagh Castle in 1867, which was finished in 1873.   Adair was never to fulfil his dream of creating a hunting estate in the highlands of Donegal as he had died in 1885 con a return from a business trip to America.

After her husband’s death Cornelia took over the running of the estate and introduced deer stalking in the 1890’s.  She also went on to improve the castle’s comforts and the beauty of its grounds, and she carried out major improvements to the estate and the gardens, Over the next thirty years she was to become a much noted hostess and continued to summer at the castle until  1916.

Glenveagh National Park as it is today.

The second Rector, who was the Rev. Henry Maturin M.A.   had been in this house from 1831, and stayed his whole life until he died here in 1880. His wife was from Portsalon and he and his children are buried in the local graveyard, The house had been vacant after the death of the rector until about the 1890’s and as Twenty six acres had been leased to the local Landlord Edward Heweston from Lough Veagh ( RIP 10th May 1906   ) he had bought the old Rectory for his sister Katie as a wedding present who had married a man from Portnoo by the name of Johnston, who was an Army officer and was later killed in 1920.

Mrs Katie Johnston had a great farm here and had run the house as a Country House Hotel, she had run a very successful business here with many repeat clients until she closed in the late 1940’s and she herself had died about 1950.

Derek Hill and English artist, and now an honorary Irish citizen, had bought the estate for about £1000 Irish pounds, and had sold the bar license that was with the estate for about £200 pounds. Hill had lived here for about thirty years and after his death the house was donated to the Irish people and was to be used as a Museum, there is about 50 acres of land with the now Glebe Gallery and about 16 acres is of gardens.

The Derek hill collection includes more than 300 works by 20th century artists such as Picasso, Bonnard, Kokoschka and Jack Yeats, also Donegal folk art, Japanese and Islamic art, and papers and paintings by Derek Hill himself.

“Find inspiration – immerse yourself in local folklore and landscape