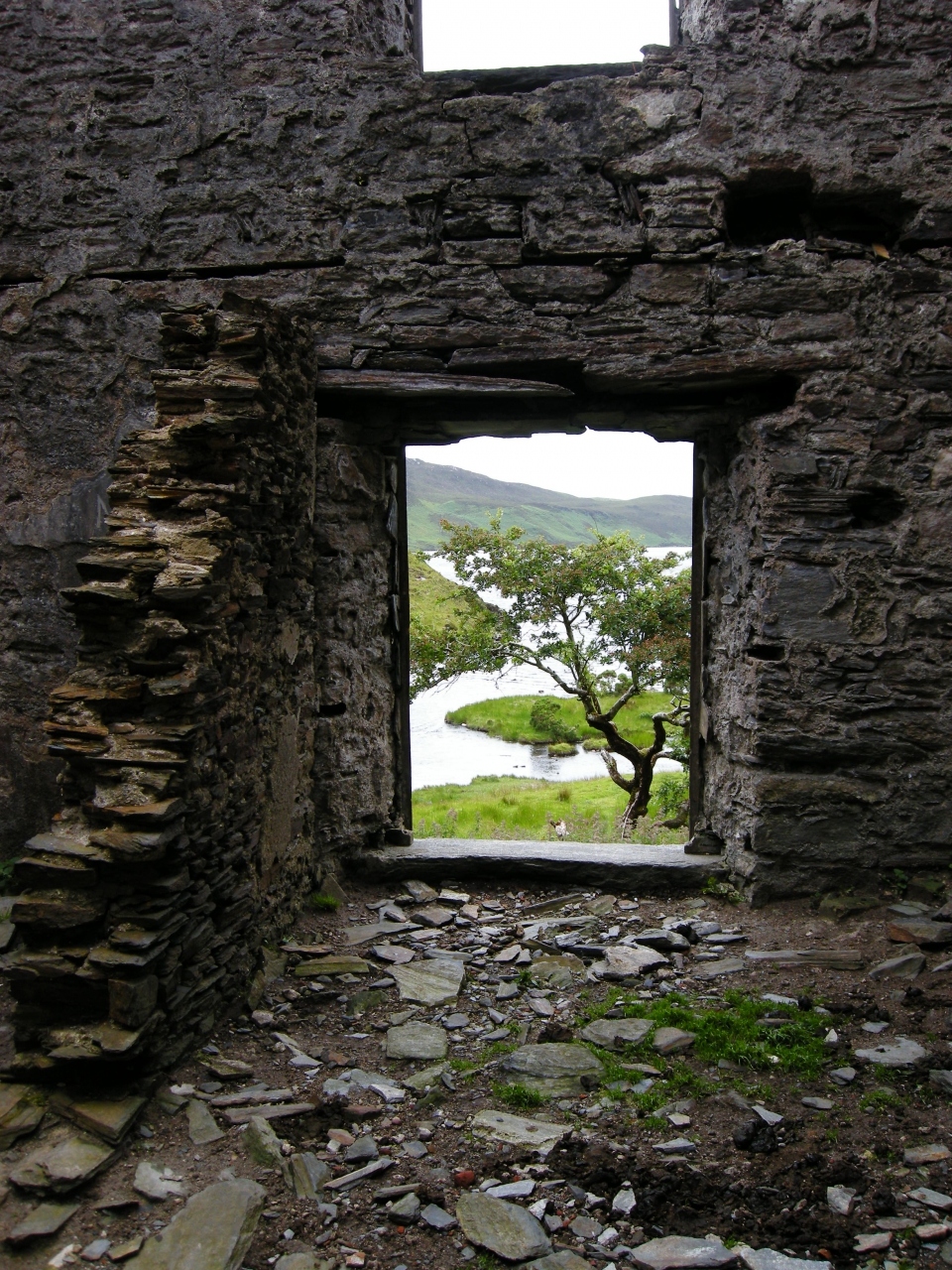 you wont be in a hurry to leave this picturesque landscape.

This has to be one of my favourite walks and the most peaceful place to bring locals and tourists alike,              Situated in the valley at the edge of Lough Atlan is a small dwelling better known as Altan Farm,  it is steeped in history with evictions and also with the sheep war,

This walk is on a heather track to the farm, and crossing the stepping stones is a great entrance to this lonesome house , which is the ideal place for your picnic, the Lough is between Aghla More (An Eachla Mhór) and Breaghy  (An Bheithigh) and great place to cool the feet on a summers day,
The walk to Altan farm is less than an hour and allow more time to make your way back as it is uphill, great place for those out for a stroll in the hills and Aghla More is there for those needing something more demanding.

History of Altan Farm…
John Obins Woodhouse , Formerly a solicitor in Dublin, Had purchased this property in 1844 along with other properties in other counties in Ireland, but in Donegal he bought town lands in Kerrykeel, Altan, Meenaclady, and Tory with the other two islands of Innishdowey and Innishbeg.
Altan is in the parish of Tullaghobegly in the barony of Kilmacrennan.
Woodhouse had said that his intention was to build a cottage in this very romantic spot as a summer residence, he had rented out his land, which was 1,500 acres, at Altan to a man named Mc Swiney or Sweeney and that he had to be paid to leave the land as he had claimed squatters rights , this tenant Mc Swiney had lived in a one roomed house and he had his cows, sheep and goats all in the room with himself,
After Mc Swiney had left this house it had taken two men , three days to throw out forty loads of manure….this was in the year 1848.
A road had been built and the land at Altan was then leased out to a man called Mr Foster , then to Mr Seaver, the land was then Advertised for let in the Gweedore Hotel on the 22nd of September.

The land was then leased by a Mr Wright and in the following September he had from 800 to 1,100 sheep grazing in the mountains and they were said to have been remarkable fat as there was sufficient grazing for them,
John Obins Woodhouse had said that he had purchased the land from Mr Thomas Olphert, from Falcarragh
On the 10th of December 1856 the shepherd in the town land of Altan was attacked, His name was Sillicoe, A Scotchman from the Western Islands, …. His house was attacked, and they robbed him of his watch and ordered him to return to his own country and that they would let no more of his country men come here.
A Mr Hunter had then taken over the farm at Altan.

How to Treat Cold Injuries