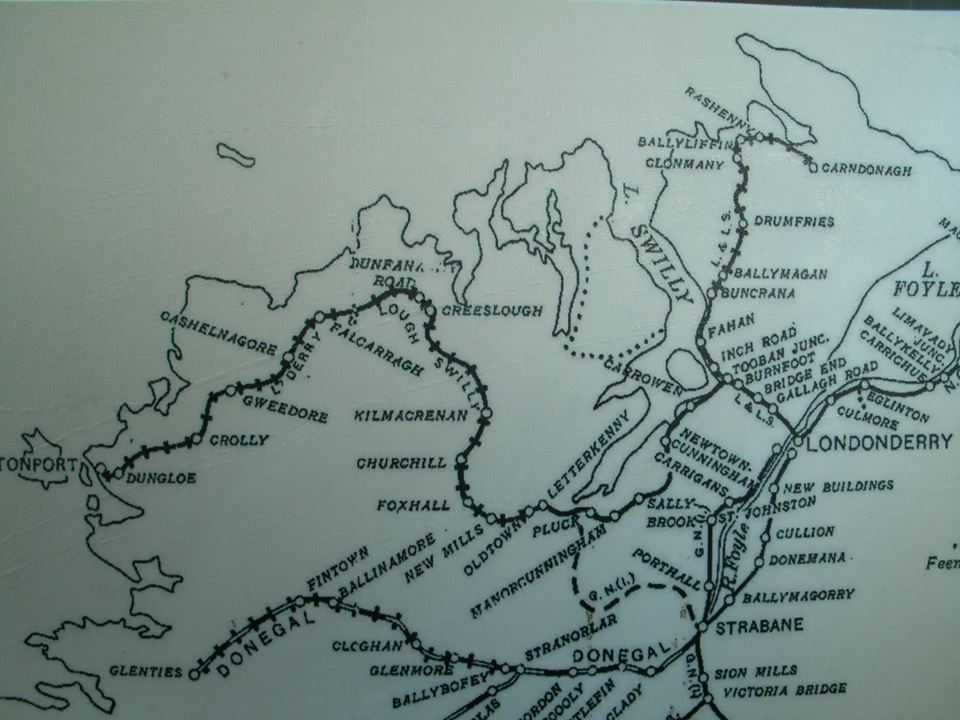 allow about 4 hours for the walk to see Lough Naboll, Lough Agher, the old railway line and the Sheperd’s lodge,

Walk along the railway and thru cuttings, and rambling on an old bog road to Lough Naboll at the base of Muckish Mountain , learn about the Flora and Fauna and the history of the Muckish Glass. Heading West along some old cart tracks and stopping for lunch at the banks of Lough Agher, and then going to the Sheperd’s lodge that was used for the hunting parties from Ards House and then return along the railway to car park.

Walk 2.  walk from Creeslough to Falcarragh along the old railway,   allow 2 hours one way , and either walk back or get a taxi from the old Falcarragh station house.

This is a low level walks is the old light gauge railway walk from Creeslough to the Falcarragh station, As I walk the track I try to Imagine what it was like to be sitting on the old Muc Dubh as it rattled its way westwards to the its next stop .

The ‘Light railway (Ireland) Act 1889’ had decided that they would build a track from Letterkenny to Burtonport, this was built by the office of public works and the first train had travelled on this track, that was only 112 inches wide on the 9th of March in 1903. The last passenger train on this line, from Letterkenny to Burtonport, was in June 1941 and in 1947 the line closed entirely.

I would start walking just after gatehouse no 12 , on then going on the embankment and going through some cuttings with Muckish mtn on my left and the miners path still visible etched into the shoulder of this Majestic Mountain , I then pass Lough Agher on my right and keep heading towards gatehouse No 13 and then to Falcarragh station. My ambition is to have this old railway path reopened from Creeslough all the way through to Burtonport if possible for hill walkers, mountain bikes and as a track for horse clubs to enjoy the natural beauty that we have to offer here in Co.Donegal.